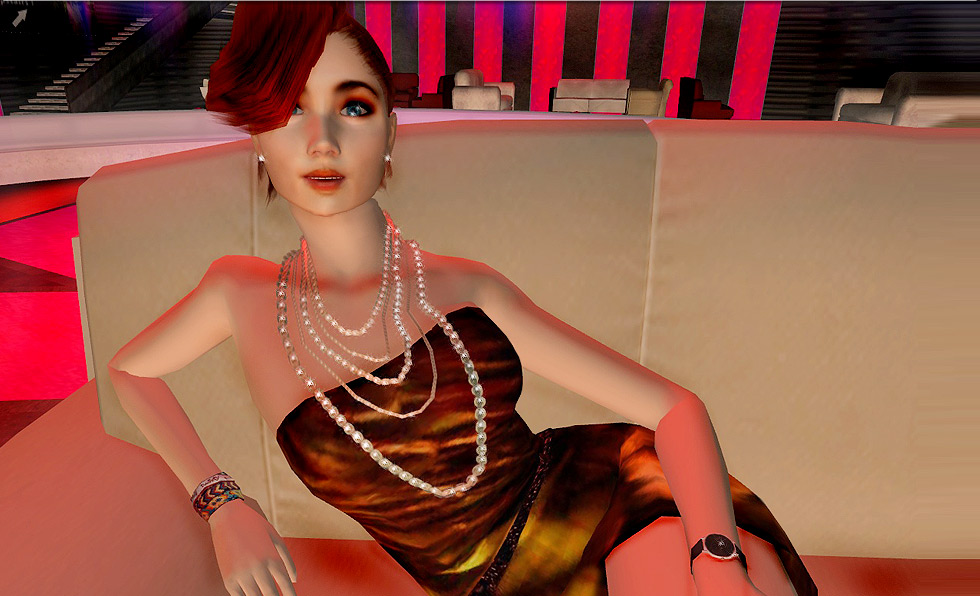 We are all living in the Image World, not the real world. We’re images in the image world and we don’t know it. Images are only images – they are ten-a-penny. They are a dime-a-dozen. They come out of nowhere and go nowhere. They multiply in a flash but really there’s nothing that’s multiplying – it’s all just a function of us not seeing things right, not seeing things straight. Or we could also say that images are a function of fear; they are a function of the distortion in perception that occurs with fear – we’re trying not to see something that frightens us so we end up seeing (and reacting to) something that isn’t there instead.

When we’re in the Image World then the only thing that matters is the image. We’re obsessed with images, one way or another – we’re either trying to do one thing with them or another. We either want to get closer to the image or further away. Our relationship with all the images that we either like or dislike is a function of our image of ourselves. How we react to all the other images depends upon the image we have of ourselves, the two-dimensional idea or concept we have of ourselves.

In a way it could be said that everything is very straightforward in the image world – everything is about ‘maintaining the self image’. We are always trying to get the self-image to look better (both for ourselves and any audience that there might be) and prevent it from looking worse, prevent it from being undermined in any way. This is the ‘game plan’ when we are living in the image world – all we have to do is work away at improving the appearance of the self-image. We have to work away at shining it up, putting a polish on it, brushing it and preening it and protecting it from any slurs or insults that might be thrown in its direction…

So how simple and straightforward is this? What’s to not understand? This is we could say the ‘selling point’ of the image world. This is what we like about it – we like that it’s so ridiculously straightforward. That’s the appeal, that’s the attraction. The downside of the deal is that this makes everything extraordinarily fragile, extraordinarily brittle. The self-image is incredibly insecure and we become full-time slaves to this insecurity. We become full-time slaves to maintaining the self-image’s illusory integrity. The ‘task’ might be simple and easy to understand but it goes on forever, it never lets up. There is never any break from ‘the tyranny of the task’.

So the self-image is as we have said a very fragile kind of a thing and it needs handling with care. We need to walk on eggshells around it. We need to tiptoe. Extraordinarily specialized supports need to be put in place – we could perhaps think of a type of tropical fish with a particularly delicate constitution that (when out of its natural habitat) needs to be kept in a aquarium where all the parameters (temperature, pH level, etc) are maintained to within precise limits. Any fluctuations and the fish straightaway sickens, loses its gorgeous lustre…

We could also think of the Image World as a five star hotel for the super-rich. When we are super-wealthy in this way we expect (of course!) to be treated in a particularly deferential manner. Anything else and our feathers get ruffled! We can only be addressed with a very particular type of language, certain intonations and inflections need to be employed or else our noses will be put out of joint. No effort is spared therefore in created the right kind of (artificial) environment for us – after all, we’re paying big money for it. We won’t come back otherwise and all our money will go elsewhere.

To continue the analogy, it could be said that within this expensive-to-maintain environment the impression is nurtured that we are ‘the lords and ladies of all we survey’. We are kingpins, we are top-dogs, we are the super-elite. We are not under any circumstances to be challenged or given any cheek. No one is ever to say the world “No” to us – whatever we wish for is made to come about. We are humoured in every respect, in other words. We are humoured as far as it is possible for us to be humoured! This is what we are paying for, after all. That’s what makes a five-star hotel a five-star hotel and not a hostel.

When we are safely in our ‘managed and protected environment’ (where all our needs are catered for and all our wishes are made to come true) we get to feel pretty special, therefore. We get to feel pretty good about ourselves. and yet this feeling is all due to the environment that we’re taking for granted being maintained to within precise limits, just as was the case for the delicate tropical fish we were talking about earlier. Take us out of this highly-specialized artificial environment and straightway our ‘air of entitlement’ stands out like a sore thumb, becomes ridiculous, becomes a dangerous liability. We have in other words become dangerously (and laughably) ill-adapted to the real world. We wouldn’t survive there very long (or at least our pretensions to greatness wouldn’t)…

It’s not just that we are ill-adapted to the real world then – we can’t survive in it. No one is going to humour us any more (because we’re not paying them money to do so) and so the illusory ‘idea of ourselves’ that we have (that we are cherishing so much) is going to ‘die the death’. This is exactly how it is for the self-image when it is exposed to unprogrammed or unmanaged reality. ‘Reality’ – which is to say openness (or the lack of confirmation or validation for our biased view of ourselves) – is something that proves to be highly inimical for us (as we see ourselves). This is because the self-image is totally dependent upon a certain external structure in order to be able to maintain itself in the manner in which it is accustomed. The self-image needs a certain type of structure on the outside to maintain its own structure, the ‘structure which is it’.  The self-image IS its structure – there’s nothing else to it other than this and that is why it is so very brittle!

‘Space’ and ‘structure’ have this relationship. An image (or ‘form’) has to exist within a world that supports it, confirms it. If there are ‘too many possibilities’ (i.e. too many ways of interpreting what is going on) then it starts to go to pieces, it starts to lose its integrity. There’s nothing to hold us together, nothing to keep us ‘black-and-white’. We can’t ‘take ourselves seriously’ anymore and for the self-image this ‘lack of seriousness’ is detrimental – it is the beginning of the end. We simply can’t survive with ‘freedom of interpretation’, with openness. The brittle self-image just can’t cope with unprogrammed reality and that is that.

This is why the Image World is always so narrow, so rigidly defined, so petty and limited in its scope – because that’s the only way that our idea of ourselves can get to ‘stand up’ as a going concern. The Image World and the self-image are actually the same thing – the ‘idea of ourselves’ that we are holding so tightly onto and ‘the set of biases that are needed to maintain this fiction are one and the same. It’s all just the one seamless construct. The image and the conditioned world it inhabits (the world it needs to inhabit) are the same construct – impossible as this may be for it to understand.

But if the image and the Image World are one and the same thing then where is the freedom in this? Where is the scope in this? What possibilities are there in this? The world that is made up of a thing and itself is a null world – there’s nothing in it. There are no possibilities there. When the ‘bias’ that is the self lives in a world that is a reflection or projection of this bias then reality itself is excluded because reality is the ‘not-bias’, because reality is the ‘freedom from bias’. Reality is not to be found in the ‘relationship’ between a definite statement and itself!

We can’t however say that images (or ‘forms’) don’t exist in reality, don’t exist in openness. They do exist. It’s just that they exist ‘in relation to not existing’, they exist playfully, provisionally. It is as if a note sounds out, then is gone. The note exists in relation to its own disappearance, so to speak. The note ‘lets go of itself’, it doesn’t take itself seriously, it doesn’t try to perpetuate itself. It doesn’t try to exist in an absolute way rather than a provisional one. It is playful…

But what happens when the note does try to hang onto itself make, does try to perpetuate itself, does try to make itself into an ‘absolute fixture’ of reality? What happens when the note is ‘afraid to let go of itself’? We have of course already answered this question – the self-image can only maintain its ‘illusory integrity’ by staying secluded with a very particular environment, an ‘artificial context’ which confirms its validity. The self-image can only ‘hang on to itself’ by making sure that the Image World is the only world it knows, the only world it ever encounters. That’s the only way it can work for it – there is absolutely zero choice there!

But the Image World, as we have said, is a null world. It’s a world with nothing in it. It’s a world within which nothing can ever happen, a world that is quite devoid of freedom, a world that is quite devoid of ‘new possibilities’. The Image World is as we have indicated a kind of ‘super-duper comfort zone’ – it cushions us, protects us, pampers us. The price for having such a specialized comfort zone is however that have to put up with a situation in which there is zero freedom – we haven’t the freedom to move or change in any real way. We haven’t the freedom to perceive reality. Instead, we have to make do with kind of ‘substitute for freedom’, which is the freedom to spin.

It is as DH Lawrence says in his poem Death is not Evil, Evil is Mechanical; if we deny our own mortality (and opt to exist instead within some kind of sterile ‘comfort zone’) , then

…thou shalt begin to spin round on the hub of the obscene ego
a grey void thing that goes without wandering
a machine that in itself is nothing
a centre of the evil world-soul.

Spinning is all we can do when we have no real freedom, when our life is made up of nothing more than mechanical certainties – we spin from POSITIVE to NEGATIVE and then back to POSITIVE again. Where else can we go? What else is possible for us, other than a self-negating circle! This is what our comfort zone  – the glossy Hi-Res Hi-Def Image World – is, if only we could see it truly – a self-cancelling circle that goes on and on forever without ever running out of steam. This is the ‘perpetual motion machine’  of samsara…