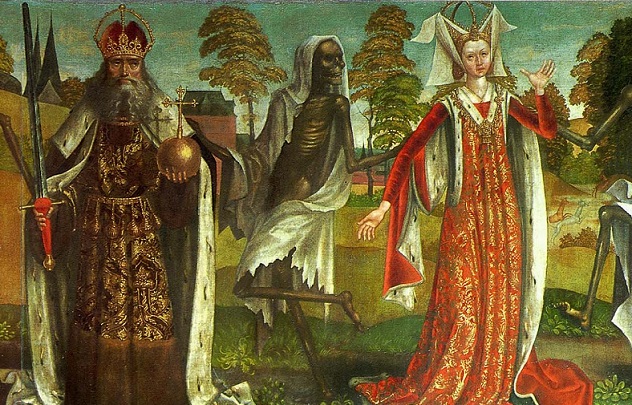 Imagine that reality is a perfectly flat surface that we cannot see because we can only see distortions to this surface. We cannot see reality at all – it simply does not exist for us. When a displacement of the flat surface which is reality occurs however then we can see it – not reality that is but just the displacement of it. The displacement stands out, it exists as a real and verifiable fact. Reality – on the other hand – does not stand out and therefore does not exist. It does not exist as far as we are concerned, anyway, but obviously it still since it is what gives rise to us in the first place…

The ‘displacement’ that we are talking about here is a symmetry-break – it is a break in the perfect symmetry of reality. This therefore is a basic feature of psychology – we can see the breaks in symmetry but we can’t see the symmetry from which they arise. We can’t see or in any way conceive of the state of original symmetry and so this makes it ‘not real’ for us. The displacements to reality seem real, as we have said, but actually they aren’t. The displacements to reality which make up the only reality we know aren’t real because they always come in pairs, each member of a pair being the antithesis of the other! Whilst the symmetrical situation has no opposite, no ‘antithesis’, displacements from symmetry always do. This is of course true for any disturbance to a flat surface – no matter what type of disturbance or displacement it might be.

Breaks in symmetry always produce self-cancelling pairs; that’s what a symmetry-break is – it’s a left-and-a-right, an up-and-a-down, a yes-and-a-no… That’s what a ‘disturbance to a flat surface’ is – it’s a sinusoidal fluctuation, it’s a wave phenomenon with an equal amount of displacement occurring beneath and above the zero axis. When we read about ‘duality’ in Eastern metaphysics this is what it being referred to. When we look out at the world via the instrument of the thinking mind all we ever see is duality – duality is all we ever can see because thought works by splitting everything into two. That what defines the world for us, the fact that we have polarized everything, the fact that we have split everything up into opposing camps. This what makes the world real for us – the crisp and clear demarcation of everything into right and wrong, agree and disagree, fact and fiction, ‘is’ and ‘isn’t’.

There’s another way we can talk about duality too. We can say that all of the displacements that stand out to us as being real stand out because of the way in which they either look attractive or unattractive to us. The defining dissymmetry in question is created for us by the two possibilities that we have of either ‘liking’ something or ‘disliking’ it, being ‘attracted’ to it or ‘repelled’. We can relate this basic polarization to the nature of the self or ego – the self or ego is always biased in its approach to everything by virtue of the fact that it is a self or ego! There’s no other way it can do things. The self is always going to be fundamentally biased because it is always going to be seeing things from its own narrow viewpoint and this is what a self is, it’s a ‘narrow viewpoint’. The self always sees everything from its own point of view and this means that it will always see everything as being either to its advantage or to its disadvantage. What’s to my advantage I like and what’s not I don’t, obviously! People who help (or agree with) me are my friends and those who don’t help me or go against me are my enemies. Such is the prosaic life of the self or ego!

Fascinatingly, therefore, when we find ourselves in the position of the self or ego we find ourselves in a position where the entire world is made up of either stuff we like or stuff we don’t like. This is why there can never be such a thing as an ego that is not opinionated! People in the world are divided up into either our ‘friends’ or our ‘enemies’ – if you’re not for me then you’re against me, in other words. Or we also like to say – ‘you’re either part of the solution or you’re part of the problem’. This is the classic ‘polarizing’ position of the ego. What this means – in very simple terms – is that when we see something that stands out to us because we find it attractive, or because we find it unattractive, then what we’re actually seeing is ourselves. If it’s not relevant to us then we don’t see it, we don’t care about it. If it’s not us then we don’t see it, in other words. If it’s not us then not only is it ‘invisible’ to us, it’s utterly inconceivable. This is the true meaning of the word ‘narcissistic’!

There is something very curious going on here. Some strange, back-to-front principle is at work. We have said that the only reason something stands out to us as existing, as having actual existence, is because we are either attracted or repelled to it. Attraction / aversion is what confers existence, in other words. But we also know something else, to add to this – we also know that that all disturbances of the ‘flat surface’ which is reality are unreal. All disturbances are unreal – as we were saying earlier – because disturbances (or ‘breaks in symmetry’) always occur in self-cancelling pairs. Of course disturbances to a flat surface always occur in self-cancelling pairs! We hardly need make a big meal of this – whoever heard of a crest of a wave without a trough, or a trough without a crest? Or to paraphrase Alan Watts, whoever heard of selling without buying or buying without selling? Yet even though this is the clearest thing in the world to see, we never bother to work out the implications of this very basic understanding.

We can now set out these implications very easily. We know that the flat surface (i.e. the state of symmetry) is both invisible and inconceivable (because there’s nothing there to grab hold of, nothing there to get an angle on) and we also know – by the same token – that for something to be visible / understandable to us it has to be a disturbance or displacement of this flat surface. Symmetry is unreal to us whilst breaks in that symmetry are real, in other words. But at the same time we also know that only symmetry is genuinely real whilst the disturbances to this symmetry are only apparently real; they are ‘only apparently real’ because they are always cancelling themselves out. So now all we have to do is ‘add two and two together and see if we can come up with the right answer’. It’s like being in primary school again and learning our A, B, C all over again! Only displacements of the flat surface exist for us and yet these displacements aren’t actually real events, despite being both visible and eminently cognizable to us. What does this mean therefore? How exactly does this work? Why do we see the dualistic world as being real when it isn’t and the non-dual world as being unreal when it is actually the only reality?

We have of course already answered these questions. When we see something that either attracts or repels us what we’re actually seeing is ourselves. We’re attracted to our positive projections and repelled by the negative one and our projections are us – what else would they be? The reason we unreality as being real therefore (and can’t in any way relate to actual reality) is because we ourselves are unreal. How else could this possibly work, anyway? This point is so very straightforward when we do understand it – nothing could be clearer. The whole point of the ‘self’ is that it is based upon a black-and-white demarcation between what is and what isn’t, what is ‘in’ and what is ‘out’. The self or ego is at root nothing other than the principle of exclusion, or division. Without exclusion, without division, without black-and-white demarcations, there is no self. The self is a jumped-up boundary, nothing more. ‘Self’ requires ‘other’ and ‘other’ requires ‘self’ – no one can argue about this. But the point is that when we say this (when we say that the self is a boundary between what I call ‘me’ and what I call ‘not me’) what we’re saying is simply that the self is a disturbance of the underlying symmetry (symmetry being where there is no ‘up’ and no ‘down’, no ‘right’ and no ‘wrong’, no ‘yes’ and no ‘no’) and so what this means is that the self isn’t real. It isn’t real because it’s a self-cancelling fluctuation.

What’s real is what we can’t see and aren’t interested in anyway. If we were at all interested then this would be something and we would get somewhere as a result, but when there is absolutely no interest – as there isn’t in everyday life – then there’s no chance of anything ever happening. The status quo (which is ‘disguised unreality’) is going to carry on forever. We’re completely fixated upon the objects of our attraction / aversion – we’re watching out for them with everything we’ve got. We’re watching out for them we’ve got because that’s the name of the game, because that’s what it’s all about. We’re watching out for anything that attracts or repels us with the eyes of an eagle and we aren’t ever going to miss a trick. The one thing we’re guaranteed to miss here is reality, however!

This – needless to say – throws a very curious light on this business we are calling ‘everyday life’. We might call it ‘everyday life’ but actually it isn’t any kind of life at all. We’re missing life at every turn – we’re always looking elsewhere, we’re always looking out for our own projections! Because we’re not real we’re always looking out for our own projections and because we’re always looking out for our own projections we’re not real and this is therefore a loop that we aren’t ever going to break out of! Oscillating between like and dislike, good and bad, winning and losing, attraction and aversion is very absorbing, very engaging – so absorbing and engaging that it doesn’t leave any time for anything else. We’re constantly busy with it, and we’re convinced that what we’re doing is important and that – somehow – it’s going to pay off for us in the end. It won’t though – obviously. Everyday life is actually a form of living death. What we call ‘life’ and celebrate accordingly is actually a form of living death. As the line goes in Revelation 3:1 – ‘Thou hast a name that thou livest, and art dead’. …