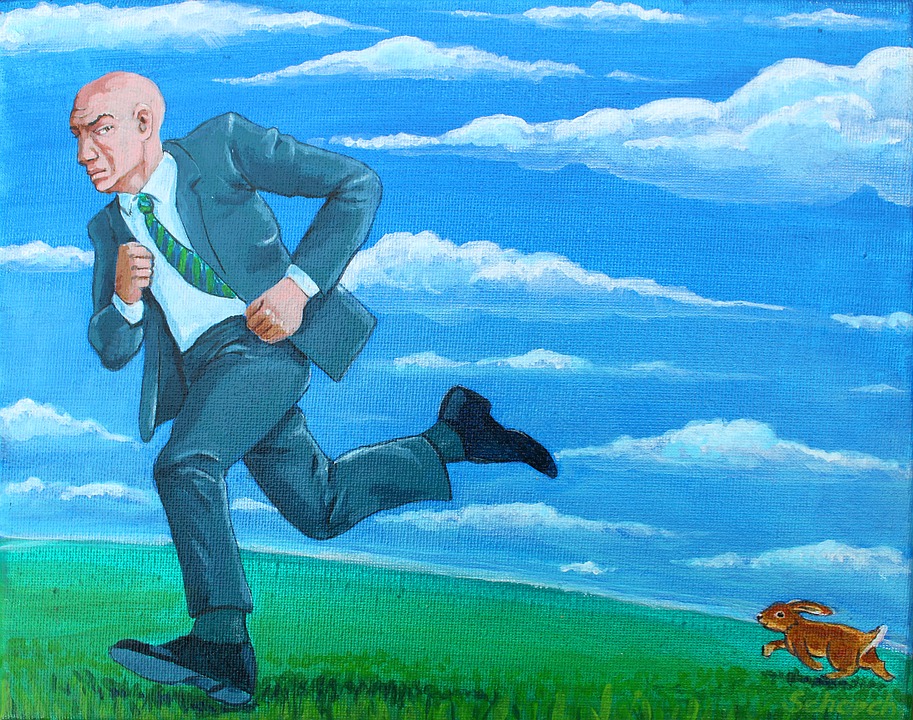 We produce the Mind-Created Virtual Reality by being purposeful the whole time. We don’t think we are being purposeful the whole time but we are – every thought we have is ‘a purpose’. Every thought we have is a purpose because it’s motivated solely by desire or fear! Our ‘purpose’ is to avoid what we fear or obtain what we desire, in other words. There’s no such thing as ‘a thought that hasn’t been motivated by desire or fear’ – if we weren’t desirous or fearful then we wouldn’t bother thinking in the first place. Without attachment there is no need for thought, after all.

This isn’t at all obvious. We don’t see thought as being ‘nothing more than fear/desire’. We might for example see it as ‘exploring our environment’ or ‘making hypotheses about the world that we live in’. We don’t see thoughts as our way of ‘shutting down space‘ so that we don’t have to be aware of it’, but it is all the same. What else could it be – how else could we describe what we doing when the essential activity of thought is to replace reality as it is’ with our own comments about ‘what it is’, with our own crassly oversimplified version of ‘what it is’? Thinking is a positive act – we are projecting our own meaning out onto the world. Thought is never receptive, never sensitive – it’s an act of ‘fundamental aggression’.

The Mind-Created Self is inherently aggressive; it is solely motivated by attachment, solely motivated by greed and fear. Suppose we wished to deny that this was the case? Suppose we wished to put forward an argument to the contrary? To say that we are constantly attached to either what we want or what we don’t want is hardly a flattering way of seeing ourselves, after all. Where’s the nobility in this? What’s to respect or admire in this? There is something unpleasantly squalid in such an existence, and we know it. Without some loftier type of aspiration (or guiding principle) in our lives than either greed or fear (i.e. what I want or what I don’t want) there would be absolutely no redeeming feature to our existence!

And yet suppose that the Mind-Created Self were to be genuinely interested in its environment, its own situation? Suppose it were to hold off for a moment or two with its constant unremitting aggression? Suppose it were to refrain from ‘shutting-down space’ just for a brief period of time? What would happen then? This is where the ‘problem’ comes in. The ‘problem’ – for the MCS – is that being receptive or open to the nature of space (the space that makes up its environment) straightway tells it something about itself that it very much doesn’t want to know. The MCS receives no confirmation from space – naturally it doesn’t since it is not in the nature of space to confirm fixed positions or definite statements. If space were to confirm fixed positions or definite statements then it wouldn’t be space; it would then lose its ‘space-like’ quality!

Space is space because it contains no inherent biases, no inherent prejudices. Space is space because it does not conform to any rules. That’s what space means – it means that it facilitates all fixed positions, all definite statements, with equal facility. It doesn’t play favourites – it is not after all the case that the space inside our living room prefers some types of furniture more than others. Space doesn’t mind what we place within it – it really couldn’t care less and this (as we have just said) is what makes it space. Space is like the Universal Set – the Universal Set doesn’t come with any stipulations about what it can or cannot contain. The Universal Set is not ‘an exclusive club’ – it’s not snobby! No model or theory is given preferential treatment. U is the set of all possible statements, all possible viewpoints, without any exception, and it just isn’t possible to get any more unbiased than this!

There is a big problem for the MCS here though – there’s actually an insurmountable problem. This problem has to do with the fact that space doesn’t specifically validate its existence. The MCS is a fixed position, a definite statement, and space does not ‘humour’ it by telling it that ‘the position which is it’ is any more valid, any more true than any other possible position. Space neither agrees nor disagrees with it, and this lack of feedback proves to be extraordinarily unsettling! How can it continue with the game that it is playing unless it is somehow ‘humoured’ in doing so? The game is only a game, after all; it’s not real, it’s only a playful exercise in ‘let’s pretend’… The MCS is not well disposed to this type of an awareness however – it is nothing if not serious in its nature, just as all rules are serious, just as all biases or prejudices are serious. The MCS is, after all, predicated upon an entirely serious (i.e. non-ironic) boundary – the boundary between ‘me’ and ‘you’, the boundary between ‘me’ and ‘everything else’. And yet space doesn’t recognise this all-important boundary at all!

The fact that space doesn’t recognise boundaries, all rules, or biases isn’t really ‘a problem’ of course – it’s actually a great thing, a marvellous thing. Nothing would work otherwise! The moving wheel cannot turn without the still point at its centre, just as the Dao De Jing says, and the ‘still point’ (i.e. the hub) is nothing other than space itself (or ‘the Dao’). It’s the tree trunk that gives rise to all the branches, or the branch that produces all the leaves, to use another metaphor. The problem only comes into being when the leaf wants to deny the branch that it came from and be seen as ‘a thing in its own right,’ so to speak. This is the dilemma of the MCS – it cannot see itself as being ‘connected to everything else’ (or as ‘an off-shoot of an Invisible Source’) because if it does that then it straightaway loses its sense of ‘agency’, its sense of ‘concrete selfhood’. It is no longer a fixed thing in this case but ‘a flowing movement’ and this means continually letting go of its idea of itself.

For the MCS to let go of its idea of itself is however the same thing as it ‘embracing its own nonexistence’ because the MCS – obviously enough – is only as an idea! What else could it be? Rather than embrace the humorous reality of its own nonexistence – which it is functionally incapable of doing anyway – it gets around this by creating its own version of space, the conditioned type of space within which it is supported, within which it is validated or confirmed. This conditioned (i.e. biased) version of space (i.e. space that is not space) is what we have been calling the Mind-Created Virtual Reality. Actually, the Mind-Created Virtual Reality is the very same thing as the Mind-Created Self, and so of course we can never cease from being ‘purposeful’ the whole time when we are identified with this image, this concept or idea of ‘who we are’. We’re ‘creating ourselves with our own purposefulness’, after all. We’re creating ourselves with our own compulsive purposefulness and we’re afraid to stop…