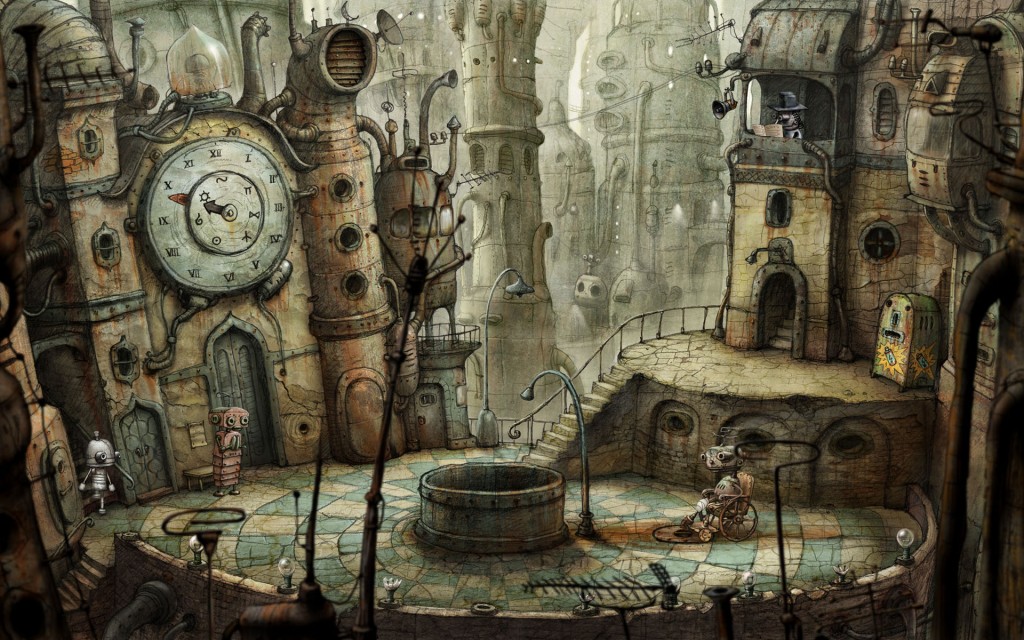 The ego is created by the machinery of thought – whenever the ubiquitous machinery of thought starts working it creates the ego. The other way of putting this is to say that whenever the ubiquitous machinery of thought starts working then it creates a closed world, a world which is no world – a world that is null, a world without actual content. Machinery can only ever create null worlds; machinery can only ever create a world that is a faithful echo of the machinery that gave rise to it, and machinery is always null. Machinery is by its very nature null and so everything it creates is therefore also going to be null. The appearance of genuine possibilities is created, but not the actual reality of them.

As outlandish as this might sound to our ears, what we are saying here is perfectly straightforward. A machine only ever does what it has been designed to do; there’s no such thing as a machine that does something other than what it was specifically built to do – if it does this then we will say that it is ‘broken’! Machines only function as machines because they do exactly what they are designed to do and nothing else. Specificity is everything here; predictability is everything when it comes to machines. This however is just another way of saying that machines operate on the basis of redundancy – if what it says on the label is exactly the same thing as what is actually in the jar then this is redundancy, it is redundancy because the ‘content’ in this case is purely and simply a continuation or extension of the description which is the label. Nothing new, nothing unexpected is coming to the picture, and as we have said, this is exactly what we want out of the machine. We want the outcome which we have specified in advance (or ‘predicted’) to be the only possible one.

If the world that I live in is produced by a machine then that world too is going to be a redundancy therefore. There is no world in other words – there is only the machine. The machine may produce ‘the illusion of a world’, but that’s all it is – an illusion, a phantom projection, an image (or ‘series of images’) that we mistakenly take to be substance. So if we accept that we create the world that we know with our thinking, and if we accept that thinking is machinery (i.e. that it is strictly rule-based in its nature) then we are bound to acknowledge that we are living in a ‘null world’. Needless to say we don’t admit this, and – what’s more – we are very far indeed from ever admitting it. We couldn’t be further! This isn’t merely a figure of speech either – for us to live the type of life that we are living it is absolutely essential that we are as removed as far as possible from the position of having any awareness at all of the redundancy of everything that thought produces.

Thought automatically creates two things, therefore. It automatically creates two things that are really only the one thing (and furthermore this ‘one thing’ isn’t actually any-thing at all because it’s a redundancy). The ubiquitous machinery of thought – which is exactly the same in all cases, exactly the same wherever we find it – creates the defined world and it also creates the defined self or identity that inhabits this world. The defined self fits into the defined world just like a jigsaw piece fits into the jigsaw to which it belongs. Both the player of the game and the game itself have been generated by thought – the player needs the game just as the game needs the player. Within the terms of the game a very particular type of meaning exists and this is the meaning of ‘the player’s struggle’. The game – any game – is a struggle – that’s all there is to a game, that’s all they ever could be, and this gives rise to the two possibilities that (apparently) exist for the player – the possibility of doing well in the game and the possibility of doing badly. Because there is only the one type of meaning in the game and because the game completely defines the player of the game, there is never going to be any more to the player than either ‘doing well’ or ‘doing badly’. The player epitomises the polar nature of the game because the player – at any one time – is always going to perceive themselves as either moving in the direction of either winning or losing. No other possibilities exist in the game, after all. No other directions exist apart from the [+] direction and the [-] one.

We can also say that, in psychological terms, the player obtains a type of meaning in their life that is completely dependent upon their own perceptions with regard to whether they are moving in the direction of either succeeding or failing, whether they have the possibility of succeeding or not at the overall task of life. The perception that we do have the possibility of winning gives us motivation and determination to continue with the struggle, as well as giving us a positive or empowered view of ourselves. The reverse becomes true when we doubt ourselves, when we doubt our ability to obtain a positive outcome. What we are playing for is the cessation of the game, as James Carse says; we are struggling gamely in the way that we are struggling because we believe in the possibility of bringing the play to a close and thus ending the struggle. What we are jousting for so determinedly is an illusion however because is no such thing as ‘not struggling’ in the game – that’s the one thing the game can’t provide us with. There’s no such thing as ‘rest’ in the game, the only possibility that there is here is the possibility of ‘continuing to strive for an unattainable ideal’. There’s no such thing as ‘finally winning the game’ (and separating ourselves in a permanent way from the negative or unwanted outcome), only the continual unrelenting compulsive orientation towards this mirage, as if it were a real thing.

The ego is therefore ‘that actor which is continually engaged in an unwinnable situation’, or ‘that actor which is engaged in a struggle without an end’. More than this, the ego is ‘that actor which is engaged in a struggle which can never bring to a conclusion, but which at the same time it believes it can’. Hope springs eternal, and so on. What we are saying here therefore is that the only type of meaning (the defining type of meaning) that the player has (the source of its motivation) is the ‘meaning’ that comes out of its belief that it is possible to achieve a plus without a minus, which is ‘the hopeful belief that it is possible to travel in a circle without coming back to where we started off from’. What this motivation, the motivation that is imposed upon us by the game, comes down to is the compulsion to achieve the impossible therefore. All games operate on the basis of ‘the compulsion to achieve the impossible’ and the way to play a game is simply by not seeing this, by not seeing that the impossible is the impossible, by not seeing that struggle is unwinnable. We have a very specific type of blindness in the game, we could say – we are unable to see that what we are trying to achieve is impossible and we are unable to see that the compulsion driving us to try to do this is a compulsion, that it isn’t – on this account – our ‘free will’ at all. What’s driving us isn’t our free will or volition but on the contrary our complete lack of freedom!

The blindness induced by the game is absolutely necessary for playing the game therefore; this blindness prevents us from ever seeing that the game is a ‘null situation’ and that is what allows us to continue with it. We can’t see that the games are null situations and so we can’t see that the self or ego which we are identified with is also null, which is to say ‘wholly unreal’ – a mere flickering image that has us hypnotized, an abstract artifact created by the ubiquitous machinery of thought.