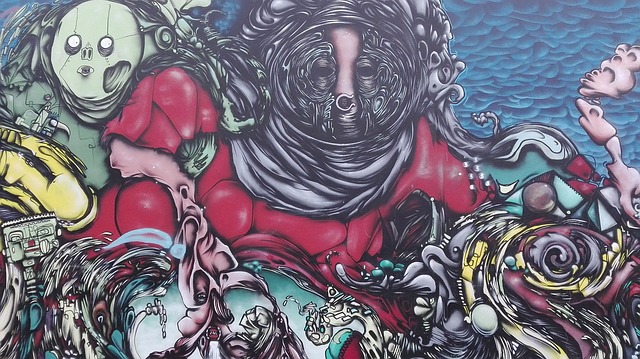 The social equilibrium is ‘an equilibrium’ because everyone concerned agrees to see things in the very same way. This does not mean that the equilibrium state in question is ‘a real thing’, however; it is the most obvious and compelling force in town, it is true (just like a person who insists on talking over everyone else the whole time) that we still can’t say that it is ‘a real thing’. When one person expresses a differing viewpoint then this is a mere ‘fluctuation’ and the equilibrium system will iron it out – that’s how the system works, by continuously ironing out whatever random fluctuations come along. That’s how the system regulates itself and – as a result – gets to continue being ‘the system’. There is a critical point that can be reached however and this critical point (or ‘tipping point’) is where there gets to be enough people expressing that differing viewpoint for it to become stabilised and thus for it to become the new system, the new way of doing things. This is how society works – it is implacable in resisting change on the basis of what it understands to be ‘right’, but when it does change (which always ‘happens against its will’, so to speak) it will automatically start resisting the next change that comes along. There is no ‘intelligence’ here, only the blind mechanical maintenance of the status quo.

Randomness does have a role in how society works but this does not mean that society is ‘sensitive’ to random fluctuations because it isn’t. As we’ve said, the whole point is that society presents a profoundly insensitive or inflexible face towards anything that isn’t itself. When a fluctuation comes along it automatically gets ironed out, when an error rears its head it gets corrected – end of story. There is no leeway here at all – the system never gives any leeway to errors! The ‘system’ is a machine for getting rid of errors after all – that’s what it does and it is very good at what it does! The curious point here is then that the system – as it is configured now – was once one of the very errors, one of the very fluctuations, that it now irons out so very effectively! There is nothing to distinguish between the officially-sanctioned E-value and all the random fluctuations that it is ruthlessly eliminating on a continuous basis in order to perpetuate and stabilise itself and yet – because the biased viewpoint we are taking on the matter – we see the equilibrium system as not being random. It’s all random really but we can’t see this!

This is the same as saying that all numbers are random numbers and that they only seem to be non-random because we are looking out at the world of numbers from the POV of a particular taken-for-granted framework of reference, a particular set of rules. ‘Non-randomness’ is a strictly relative kind of the thing, therefore – it only exists in relation to the viewpoint that we are taking for granted. In exactly the same way – we might say – the established system doesn’t seem like an error to us, it doesn’t seem like ‘an artificially-stabilised fluctuation’. On the contrary, it seems right, it seems correct. As far as we are concerned it absolutely is right and we will defend it to the last, and yet we could equally well have accepted some other regime as being the right one, and if every regime, every viewpoint, gets to seem like the one and only right way to see things or do things then what this means is that ‘the one and only right way’ is a total hallucination. The only way the right way would not be an illusion or hallucination would be if there weren’t lots and lots of equally valid viewpoints out there and this just isn’t the case; this argument can be applied just as well to religious beliefs of course – the fact that there are so very many religious beliefs, each and every one of them claiming aggressively to be ‘the one and only’ true belief, that it becomes very clear that all beliefs are made-up things. Of course all beliefs are made-up things and this is precisely why they have to be promoted so aggressively.

The social equilibrium, like any other equilibrium state that we might think about, isn’t a real thing, therefore. It’s an artefact, a hallucination that we adapt ourselves to, a perfectly hollow illusion that we will ‘defend to the last’(as if it weren’t hollow at all). We adopt it and then adapt to it because we want what it has to offer us, which is the validation of the position that we are taking, the emphatic confirmation that we have ‘got it right’. The established equilibrium state will always validate our position; it will always validate our position – the reason for this being that the position we are taking is the one that the E-state has given us, and an E-state will always validate itself. An equilibrium state can of course be relied upon to ‘agree with itself’ – this is what makes it into an E-state in the first place. Saying that the system will always agree with itself is the same as saying that it will always act so as to stabilise itself. If it didn’t then it would be there. The E-system is like the ego in this regard – it can be relied upon validate itself no matter what. The way the E-system validates itself is – as we have said – by ‘settling upon one value and then treating everything else as an error.’ This is the mechanism. Equilibrium states stabilises themselves by automatically suppressing or inhibiting any movement that is going to take us away from the agree-upon value. Any movement that threatens to take us away from the values that have been set by the system is not allowed by that system.

As long as we submit to this self-validating / self-stabilising mechanism then we’re always going to have our position, our modality of being, affirmed as being ‘the one and only right one’ and this is what we want. Naturally the system validates us because when we take up the way of looking at things that it offers us (which is the only viewpoint it allows us to have, tyrant that it is) then we become it (or ‘it becomes us’,  if we want to look at it that way). The system is only looking after itself, therefore. When we say that an equilibrium system functions just like the ego (in that it defends itself / promotes itself ‘no matter what’) then this is why – we’re talking about two different manifestations of the very same mechanism. All equilibrium systems function as ‘a self’, which is to say – they act from an unexamined basis in order to defend and promote that basis as being ‘true’. This hidden tautology lies behind all ‘rules’ and rules are what the system is all about. A rule gets to be a rule for one reason and one reason only – because we never question its basis, its ‘validity’. We look at where it’s pointing but not where it came from; everything (all of our effort, all of our attention) is directed to the observing of the rule, the obeying of the rule, leaving no awareness free to wonder why on earth we should be doing this, and that’s how the ‘organising’ or ‘structure-producing’ effect of the rules comes into play.

Unless we accept the authority of the rule none of the structure that it brings into being will be possible; it is the unexaminable nature of where the rule is coming from that acts as the necessary foundation for the ‘world of form’. There is a ‘downside’ to this apparently miraculous trick however and this is that everything in the world that has been organised by the rule actually is that rule. Everything in the apparently diverse equilibrium-world is that rule in endless disguise, and what this means is that the equilibrium world is inherently and irrevocably sterile. The E-world isn’t a miracle at all in other words – it’s a lobster pot and we are all the lobsters, milling around pointlessly and clattering our princes at each other! Nature gets around this trap (or ‘dead-end’) via the ‘amplification of random fluctuations’ principle which we have already mentioned; nature doesn’t get boxed-in in a dead end because she is not – on some deep level – averse to embracing chaos, which relates to us (if we allow it to) back to the Whole. Only randomness can relate us back to the totality of things. This principle (the principle whereby random fluctuations very unexpectedly get to overthrow the whole system and thus change everything in a profound way) exists within our own psyche just as it does in the world around us but – on a collective level – we act very effectively so as to repress it. We think we ‘know best’, so to speak, and the result of this is that is that – in pragmatic talents – there is no escape from the rigidity of the social equilibrium system which is our own rule-based mind. Only in chaos is there transcendence and chaos is not valued by the collective mind; we as individuals can appreciate chaos (which equals ‘genuine creativity’) but the Generic Mind never can and this is why it is not wise to let society define everything about us, which it very much will do if we let it.

Thought only permits change that proceeds in accordance with its own rules and those rules (naturally enough) don’t allow us question the rules! The social system which we are a part thinks that ‘it knows best’ – more than this, it knows that it knows best and it won’t hear otherwise. This is what makes it into a tyrant. The social system which is the world we inhabit and cannot see beyond is like a father who won’t be told anything and gets angry if he is challenged. The social system always thinks it knows best (in a manner of speaking) but what this really comes down to is the fact that it is inevitably going to enforce whatever biases happen to be built into it since it doesn’t have the capacity to do otherwise. The system isn’t able to reflect on the biases that underlie it – it is a machine and machines can’t do ‘reflection’. Whatever I believe is ‘right’ simply because that is what I happen to believe and this tautology is the basis for everything we do and think. There is no good reason for the tyranny in other words – all that insistence, all that controlling, all that tyrannical rigidity is based on nothing at all and this is the ‘Social Equilibrium’.