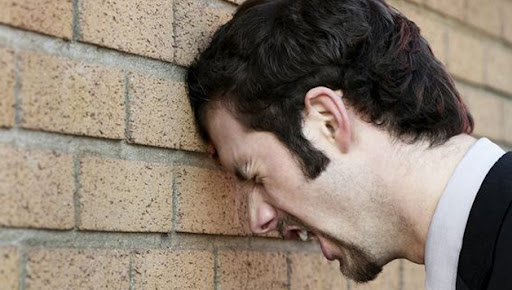 We are – for the most part – deeply averse to the type of movement that takes us away from the known and the dilemma here is that this is the only type of movement there is. Anything else isn’t movement, anything else is staying tied to the wooden post. We are profoundly averse to moving away from the known and yet at the same time being tethered to the same spot represents a lack of freedom that very quickly becomes tormenting, that very quickly becomes unbearable. A life without freedom – in this profound sense of the word – is not a life, after all. Life is a movement and so if we can’t ‘move on’ (or move at all) then this isn’t life. It is on the contrary a state of stasis and this type of psychological stasis (or stuckness) is nothing less than a living death.

This is our dilemma therefore – this is the dilemma that we all find ourselves in. It’s not a dilemma that we are consciously aware of but it’s a dilemma all the same and the way we get around it is by changing our perception of what movement is. We re-define movement to suit ourselves. This isn’t a legitimate escape from the dilemma because it’s an escape only in our imaginations but – for the most part – this so called ‘solution’ serves us perfectly well. Our solution (which is arrived at completely unconsciously) is to project a framework of meaning onto the world which isn’t really there but which is nevertheless of crucial importance to us.  Our solution is (in other words) to see everything in terms of ourselves and whether we are moving towards an advantageous situation or a disadvantageous one. That particular feedback is helpfully provided for us by the static framework that we have projected onto the world and this is why the FW is so very important to us. We’re slaves to the FW, but that happens to be just the way we like it!

This is therefore a totally different notion of what is meant by the word movement – what we’re talking about here is moving towards our goals, or ideals, which is of course a deeply familiar notion to most of us (or at least, to those of us who are orientated in terms of what E.R. Schumacher calls ‘the Global Megaculture). This form of linear movement is generally known as progress and thinking in terms of progress is of course second nature to us. Progress is ‘the only type of movement that counts’ we say, just as purposefulness is the only type of activity that actually means anything. Purposefulness is glorified by us – we swear by it as a remedy for all ills, it is the ‘be all and end all’ as far as we’re concerned – just as long as we are ‘making progress’ then things can’t be too bad!

In order for there to be this thing which we call progress we have to have two ingredients – we have to have some sort of idea as to what constitutes an advantageous situation and we have to have some means by which we can bring that situation about; we have to have some way of striving, and not just striving but effectively striving, striving that actually works, striving that yields the coveted prize. The meaning of life itself – according to this most crude of philosophies – lies in successful striving, in the ability to effectively achieve our goals. A purposeless life is a wasted life, we say, whereas a life in which we spend every waking moment working steadily and intentionally towards our goals is something that serves as an inspiration to us all. What could be more inspirational than this? Such dedication to purposefulness is truly admirable, we say, and yet – whether we put purposeful activity on a pedestal or not – the movement towards our goals, towards our perceived advantage, is not any form of movement at all. It is pure stasis, pure stuckness, and it could never be anything else. We’re suck to our unreal mental picture of the world, we’re ‘stuck to ourselves’.

The life of the purposeful self has only two things to it – successful movement (which is movement in a euphoric direction) and unsuccessful movement, which – naturally enough – takes us in the dysphoric direction. There is movement that is right, and which we all love and praise and cherish, and there is movement which is wrong, which we dread and fear. We dread disadvantage just as much as we yearn for advantage, obviously; as sweet as euphoria tastes, dysphoria is correspondingly bitter. To talk about moving towards either advantage or disadvantage is completely absurd however – I am in the same spot in both cases, both in the case of advantage and in the case of disadvantage. Advantage means simply the self, the fixed viewpoint, and so does disadvantage and so I am in ‘a self-centric position’ either way. I’m in a supremely self-centric position either way – I’m sitting there in exactly the same spot no matter which way the pendulum swings!

The point here is that the movement of a pendulum is not movement. There is activity going on, to be sure, but it is activity of the ‘tick-tock variety’ – it is activity that keeps on going back on itself, activity that keeps on cancelling itself out. ‘To cross the line twice is not to cross’, says Spencer Brown in his Laws of Form. Or, as we could also say, there is movement going on but it is tethered movement – it is movement that can never take us away (not by so much as a hair’s breadth) from the fixed central point, which is its point of origin. There is a repetitive swinging back and forth going on but that swinging takes place around a central point; we’re never going to get away from that fixed point no matter how fast or how vigorous the swinging. If I push full force ahead in the direction of the attractive pole then all that this means is that I’m going to be rushing back again just as fast and just as forcefully – the more I put my weight behind the forward swing the more force is going to be present in the reverse swing and so I’m actually acting against myself. I’m fighting against myself, but I can’t for the life of me see it.

The fixed point that we are swinging from (or the wooden post to which we are tethered) is the self, the ‘sense of concrete identity’, and so what we’re doing in the self-centric life is that we’re swinging ceaselessly between the euphoric and the dysphoric pole. Freedom, from our POV, seems to lie in striving ever harder in the prescribed direction of ‘acquiring the advantage’ but because this striving is against ourselves since ‘the force I put into the forward swing equals the force that comes back at me in the reverse one’ the only thing I am not going to obtain as a result of this bull-headed strategy is freedom! Freedom means that I am able to move away from this central fixed point, away from the wooden post to which I have been tied, and this is most definitely not what is happening here!

‘Freedom’ and ‘genuine (or non-cyclical) movement’ are equivalent terms therefore. If the word freedom has any meaning at all then it means that we are free to move beyond our central self-imposed limitation which we don’t see to be a limitation. We don’t see the wooden post that we’re tied to, in other words; we don’t see it because we’re identified with it, because we have tacitly assumed it to be ‘the only way to see things’. Once we take the fixed position, the fixed point of view, as being the only possible way of seeing the world then obviously this fixed POV ceases to be visible as such. My viewpoint isn’t visible for me at all – it isn’t visible to me because I have assumed it, because I have ‘taken it for granted’. The fixed viewpoint has now become my blind spot – I can’t see it and neither can I see that I can’t see it. This is the ‘act of forgetting’ that we spoke of earlier – I have forgotten that there are any other ways of seeing the world and it is this act of forgetfulness that creates a Positive or Defined World. When I identify with the fixed standpoint everything only gets to exist in relation to this central but invisible reference point. Everything only gets to exist in relation to the arbitrary but unquestionable fixed VP and what makes sense to me only makes sense to me in relation to this ‘mental yardstick’. Because I can neither see the yardstick nor see that it is my own construct I can’t see that what makes sense to me actually it doesn’t make any sense at all, were I to take a wider view of things. I have forgotten that there is ‘a wider view of things’, however and this is where all my problems began.

It is this forgetting that results in us ‘being tethered but also being unable to see that we are tethered’, therefore. Being constitutionally unable to see that we are tethered (because we have identified with the wooden post to which were tied) means that the only type of movement that makes sense to us (and that ever can make sense to us) is moving that exist in relation to the arbitrary fixed viewpoint that we can’t see to be such. This isn’t really movement at all however, as we keep saying keep on saying – it is false movement, deceptive movement, illusory movement. We’re not actually getting anywhere with our purposeful activity (no matter what we might think) because we don’t ever leave our mental yardstick behind, our taken-for-granted reference point behind. We don’t ever leave it behind we’re too frightened to do that, but the price we pay for this reluctance to leave our reference point behind is that all our journeys from this point on are going to be purely imaginary ones. The price we pay for giving in to fear is that all of our much-vaunted purposeful activity, upon which we place so much hope (in fact all our hope), is going to turn out to be immaculately futile…