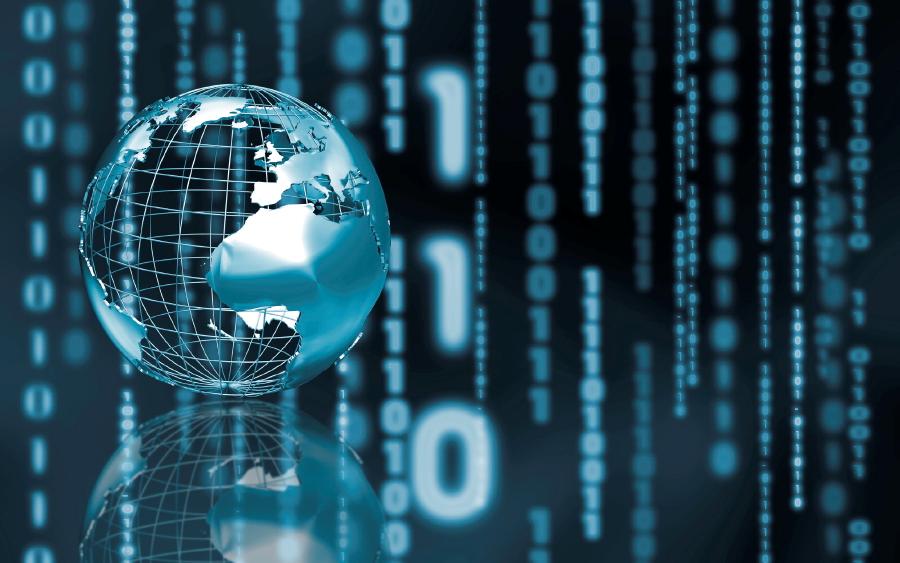 The mind-created world is made up entirely of ‘plus’ and ‘minus’, ‘yes’ and ‘no’. What else could there be in it? Rules only ever give rise to ‘yes or no’, ‘true or not true’, ‘right or wrong’, and the thinking mind is founded upon rules. The thinking mind is the rule-based mind; to think is to apply rules…

Reality is not a digital construct – fairly obviously – and thought is 100% made up of digital constructs. The thought-created world is one big digital construct! The corollary of this, then, is that there is no reality in the thought-created world. What we are calling ‘reality’ doesn’t come into this world at all; it has not the slightest bearing on it. Our thoughts are all quite devoid of reality and so too – therefore – is that oh-so-familiar everyday world that they create for us. We call this world ‘reality’ to be sure, but that simply isn’t the case. It’s nothing of the sort – it’s a mind-created fiction…

The obvious question here is “What is reality?” We’ve said that reality isn’t a digital construct – which is fair enough – but if it isn’t a digital construct then what is it? This of course is an entirely ridiculous question – any answer we get back is always going to be coming to us in the form of thought, in the form of digital constructs, and as we have already said, rules (i.e. thought) can never point at what lies midway between ‘yes’ and ‘no’ (which is reality). This is precisely our argument, that thought can never have anything to do with the reality which it claims to be relating us to. Any attempt to ask what reality ‘is’ simply causes us to go around in very tight circles, therefore.

On the other hand, we could also make the point that everything we have so far said has been said in the form of thoughts and so since we have started off we might as well carry on and see where it gets us, if anywhere! Even though thought can never point at reality (which is too broad a thing ever to be pointed at), it can nevertheless be used to make visible its own limitations and this ‘awareness of thought’s limitations’ in itself constitutes an indirect appreciation of what lies beyond thought. If we know that thought is limited, then we must also know that there must be something that is not thought, in other words. A thorn can be used to remove a thorn, and then the second thorn can be thrown away, as the formula in Vedanta goes. In the West this approach is called ‘philosophical negativism’.

We can talk about reality in an indirect kind of a way, therefore, by saying that it is what lies midway between YES and NO, which are the two possibilities provided for us by logical thought. If the answer to our question comes back as either YES or No then this seems to us to be telling us something – we’re ‘getting something back’, we’re ‘obtaining some kind of certainty’. ‘Certainty’ – we might say – is when we don’t have to go on asking questions. We don’t have to go on asking questions because we’ve received the answer! We have arrived; the train has pulled into its terminus and it isn’t going to go any further. Our long journey is now over and so that is that. Job done – what more is there to say?

Midway between YES and NO the two competing types of certainty (the affirming and the denying) neatly ‘cancel each other out’ and we’re left with no certainty at all, not even a smidgeon of it. We’re left with pure, irreducible uncertainty, which is something we can’t interpret or analyse. The thinking mind has nothing to hold onto; it can gain no purchase on radical uncertainty. We can’t get off the train; the journey isn’t over yet and there is no indication that it ever will be! What we are calling ‘reality’ is this irreducible uncertainty, therefore.

We can’t say anything about irreducible uncertainty (because it’s uncertain) but we can go one to say some more about certainty, both of the affirming and denying variety. To our usual way of looking at things a definite, conclusive answer is actual information whilst uncertainty is not. That’s our bias, to see thing like this. What we don’t pay attention to is the fact that the answer which we obtain is only ever going to be as good as the question that we asked to get it, and there is of course nothing to say that our question has any merit in it at all!  The question we’re asking could be a very dumb one, in which case the answer is going to be dumb as well.

We can leave aside ‘practical’ questions here (like, “Where did you leave the remote control?” or “What do you think about Donald Trump?”) because that would have nothing to do with the point of our discussion, which is to do with reality. Suppose I ask a particular question in an attempt to find something out about reality. This is where the difficulty comes in: in order to ask a meaningful question about reality I would first have to know something about reality, but if I knew something about reality then I wouldn’t need to be asking the question in the first place. It’s only because I don’t know that I’m asking!

If on the other hand I don’t know anything about reality (which as we have just said is the only reason I would be asking about it) and I am – so to speak – taking a ‘shot in the dark’, then any answer I get back is only ever going to be a reflection of my own ignorance! What I call ‘certainty’ – and take as actual information about the world – is only my own unrecognized ignorance which is echoed right back at me like someone shouting in a cave. As soon as we understand this point we understand all about the world which is created by the thinking mind – which is the only world we know about / care about. The world that is created by thought is nothing other than our own ‘blind spot’, our own ‘unexamined assumptions’ reflected back at us as if it were an actual external reality. This is what ‘certainty’ is – it is our own unrecognized blindness represented by thought as ‘genuine information in its own right’.

What we see as ‘information’ isn’t information at all, therefore. It’s not information because it’s not telling is about anything and it’s not telling us about anything because it’s only our own question being reflected back at us in unrecognizable form. The certainty which we are obtaining as a result of the operation of the thinking mind (and which we are using to construct the world out of) is simply our own ignorance projected ahead of us. It is our own ignorance which we are – in effect – choosing to see as an actual positive value in its own right. What we see as ‘information’ is really just what Joseph Campbell would call opacity; it’s a lack of vision which we understand to be vision, a lack of awareness that we take to be awareness. What we call ‘certainty’ is a manifestation of our blindness, in other words, but we can’t see that this is the case because we’re seeing everything upside-down.

What kind of a thing is ‘ignorance that we can’t see as such’ we might wonder? What type or species of a thing would that be? What are we dealing with here? The answer is of course that we aren’t dealing with anything at all. Ignorance that we can’t see as such isn’t any kind of thing – there’s nothing there. What we are talking about here is ‘the lack of information that falsely presents itself as being genuine information’ and this ‘false information’ is what our mind-created world is made up of. Nothing we can do on the basis of thought can ever free us from this unreal world, but if we can see the tautology involved in ‘relating to our own projections as if they are not our projections’ then this straightaway frees us from the tautology. To see that thought is an exercise in redundancy, i.e. an unreal thing that is explained (or defined) in terms of itself, is to let go of thought and as soon as we let go of though we see what thought was so very effectively blocking out, which is ‘the uncreated reality’…