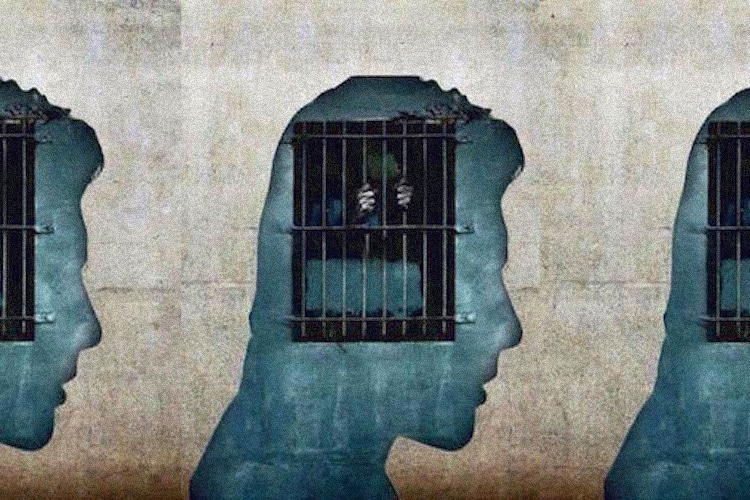 The self is what happens when consciousness gets neatly parcelled up by unreal but very convincing boundaries, or ‘lines drawn in the sand’. If you wanted to know how to create the self then this is it, this is how you do it – it’s as simple as this! First you grab the consciousness, then you tie it up, and then you seal it up with illusory boundaries…

The next thing we could point out is that this compartmentalization process takes place automatically just as soon as thought comes into play. This should hardly come as any surprise of course – this is all thought ever does, this is all thought ever can do. If anyone were to ask, ‘what does thought do?’ (which of course they probably won’t) then the answer would be – ‘it wraps everything up in neat parcels, it puts everything into categories or classes’.

How could thought ever not wrap everything up in parcels? Thought is a machine for producing definite answers – either thought puts something in one box or it puts it in another, and if it can’t find a box to put it in then it says that the thing in question has no meaning, it says that it doesn’t exist. If it isn’t in a box then it doesn’t count for anything as far as the thinking mind is concerned.

So what we are saying here is that we are letting our lives be run by what is essentially a ‘dumb mechanical process’, and not only is it ‘dumb’ (i.e. lacking in any real intelligence) it is also marked by a tendency to become actively malign. The reason thought can be said to have a tendency to become ‘actively malign’ is because it always leads us in the direction of ‘increasing certainty’. Thought can’t do otherwise – all it can ever do is point towards various certainties and if thought is our master then all we will ever be able to do is follow it obediently wherever it points. Saying that thought ‘leads us towards certainty’ is the same thing as saying that it is leading us away from ‘well-being’ or that it takes us away from ‘reality’ – which are two things that can never be separated from each other, obviously enough! Well-being that hasn’t anything to do with reality isn’t going to be something that we can rely on very much, after all!

The ‘counterintuitive’ thing here is that reality (which we might define by saying that ‘it is the situation which has not been designed or constructed by thought’) has nothing to do with certainty. We tend to think that the more certain (or ‘defined’) the situation is, the more real it is but the reverse of this is true. The more uncertain the situation is the more real it is! Our constructs are ‘certain’ because to be constructed is to be brought into sharp resolution, but since the only possible way we have of defining reality it is say that it is the ‘unconstructed situation’, claiming that something is real because it has been brought into sharp, black-and-white focus is not a valid argument!

It doesn’t matter whether we talk about thought constructing something or defining it – it’s the same thing in both cases, clearly. What is essentially happening in both cases it is that we are drawing lines in the sand and pretending that we didn’t draw them, pretending that they were already there. We will swear blind that they were already there and we will fight you if you say otherwise. We will swear blind that the opus proprium is the opus alienum, as Berger and Luckmann memorably put it in The Social Construction of Reality.

This then is the game we play. It is the game that thought plays because it has no choice, although because thought has no choice in this we could argue that it isn’t actually ‘a game’ as far as thought is concerned; it is however a game for us because we don’t have to represent reality to ourselves in this cut and dried way. Thought has to lie to itself with regard to the boundaries that it is founded upon because – as we have said – it couldn’t operate as thought otherwise. It needs that certainty. For the thinking mind this is therefore ‘a necessary lie’, but for us there is no such necessity. ‘None else compels’, as Sir Edwin Arnold writes in The Light of Asia.

There would be no such thing as the parcel or package we call the self unless we drew lines in the sand, unless we created the boundaries. Who could argue that they could be such a thing as ‘the self’ without the existence of boundaries? Without boundaries we wouldn’t be ‘a self’, without boundaries we wouldn’t be anything. The only way we get things to be things is by drawing lines around them after all – that’s how we create the certainty of things, as we have already said. There is no ‘certainty’ anywhere unless we first go out of our way to manufacture it, and yet this ‘world of certainty’ which we are creating with our thinking is in no way benefiting us. How can we say that it is ‘benefiting’ us when all it does is separate us from reality?

In the general run of things we are therefore ‘addicted to safety,’ and safety has no real ‘value’ in it itself apart from the fact that it is safe. We are addicted to certainty and certainty has no real ‘value’ to it apart from the fact that it is safe! When we are motivated by fear of the unknown then safety / certainty is all that matters to us; needless to say, we don’t care about anything else! This creates a very straightforward and easy to understand ‘economy’ for everything to run on – safety (although we won’t necessarily use this word) is the ultimate ‘value’, the ultimate ‘commodity’, the ultimate ‘good thing’, and the lack of safety (or the lack of ontological security) is the ultimate ‘negative commodity’, the ultimate ‘bad thing’.

The curious consequence of this ‘safety-based economy’ is that we value the sterile and lifeless over the creative and life-giving! The certainty to which we cling – as we have already noted – is quite without any worth or substance in itself (any more than a map or a menu is of worth or value ‘in itself’) and yet nevertheless it is all we are interested in! This is another way of saying that we have ‘inverted our value system’, and the result of inverting our value system in this way is that we immediately become hopelessly lost in ‘negative freedom’. Negative freedom is where we are not free to see that we have no freedom – what’s really happening when we are running away from uncertainty the whole time (in an ‘unfree’ way!) is that rather than seeing that this is what we are doing we understand ourselves to be voluntarily pursuing a valid ‘external value’. Our ‘goals’ are only nominal however – the real reason for our attraction to the certainty of our goals is fear, infinitely reluctant as we might be to see this truth. Fear of the unknown is the only thing motivating us, and it is fear that is the reason behind our imprisonment in the world of negative freedom.

We can’t ever be familiar with ‘the real’; we can’t be familiar with ‘radical uncertainty’, for obvious reasons! We create this convivial sense of familiarity ourselves therefore; we create it by slapping arbitrary boundaries upon the world and then denying to the best of our ability that we have done any such thing. We create the familiarity of which we are so fond by ‘parcelling up consciousness’, in other words. The process, as we said right at the beginning of this discussion, is that we grab hold of the consciousness, tie it up, and then seal it off with all our made up boundaries. As soon as we do this we create a conditioned world for ourselves that is suffused with this deceptive sense of familiarity – that sense of familiarity is ‘false’ because the self that gives rise to it is false! The self’s world is very familiar to it, but because the self in question doesn’t actually exist (because we created it by uncritically believing in our own ‘home-made boundaries’), this sense of familiarity is necessarily ‘false’!

So then we become addicted to that ‘false sense of familiarity’ that we have created; we get addicted to it straightaway and from this point on our horizons close in on us. From this point on we are lost in the deceptive realm of negative freedom and the more we chase what we mistakenly think is freedom the less free we become! This then is the ‘malign process’ that sets in the moment we hand over the reins to the thinking mind. Thought becomes a thoroughly malign process the moment we unwisely let it take control of the show; thought becomes a malign process because: [1] it automatically defines everything in sight and [2] we automatically and uncritically believe everything that it shows us!