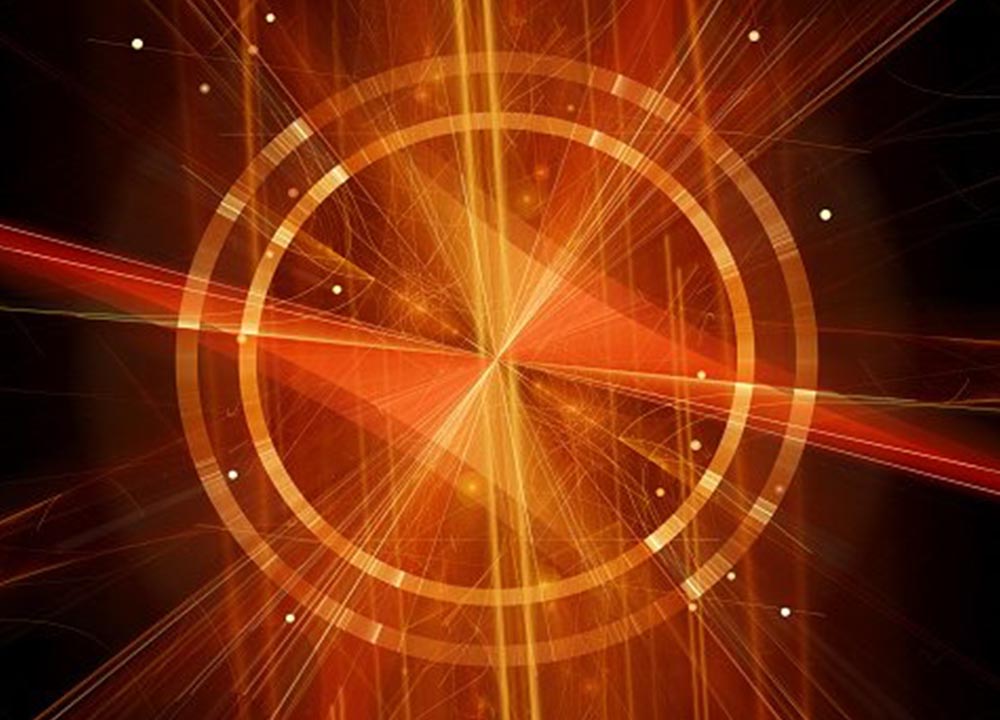 There are two paradigms behind all the things that either happen or don’t happen in this world. One is obvious, the other very far from obvious. The obvious paradigm is covered by classical thermodynamics – we can make sense of what’s going on in the world in this paradigm by saying that processes occur (or that change occurs) because the ‘end state’ of the process has a lower energy level than that of the starting off state. When we look at the world via this paradigm then everything makes sense in terms of ‘processes inevitably running downhill’ from higher to a lower energy level. The higher energy level is the ‘less probable’ level therefore, whilst the ground level to which all processes inevitably lead is the most probable, most predictable level. The most predictable arrangement of things is the one that accords with the equilibrium value to which all possible fluctuations must return and so this is the ‘equilibrium-seeking paradigm’. In this paradigm entropy is King and this is what is being expressed by the famous ‘second law’ of thermodynamics which states that the entropy of his closed system always increases. It has to increase because there is no principal in operation in a closed system other than ‘the principle of processes inevitably moving downhill’. A closed system is closed to anything that is not mechanical, anything that does not fit in with the logic upon which it runs.

Although classical thermodynamics adequately explains all mechanical processes, not all processes are mechanical. Some process – unaccountably – move uphill! From the standard way of understanding things this is like magic, it’s like believing in unicorns, or believing in elves that come out of hiding in the middle of the night and fix your shoes when no one is looking so that they (the shoes, that is) never wear out! Magic isn’t an accepted scientific theory of course and so we have major problems with this. But non-equilibrium thermodynamics isn’t magic (not in the unicorn or elf sense of the word) – it is a scientifically demonstrable reality that we have to come to terms with. We can explain how it works in quite straightforward terms. We stated earlier that classical thermodynamics sees everything as happening as a result of processes running downhill from a ‘less probable’ arrangement to a ‘more probable’ one. The ultimate ‘attractor state’ is the infinitely predictable arrangement of things where everything, without exception, has been resolved into an ‘absolutely certain’ statement of fact. There is only one defined reality and that defined reality swims into perfect, unambiguous resolution. This ‘perfect unambiguous resolution’ is the ‘equilibrium level’ to which all things tend. There is nowhere else to go after all – there are no other destinations. Just as ‘all roads lead to Rome’, all fluctuations eventually get ‘ironed out’ until they fully accord with the established equilibrium value, which rules supreme.

The exclusive (or ‘exclusive’) single reality that can’t be resolved any further and which cannot be reinterpreted in any other way is the most probable state of being and as we approach it becomes not just ‘the most probable configuration’ but the infinitely probable configuration, which is to say it has become certain, it has become 100% predictable. As soon as we say this however becomes apparent that there is something funny going on here; we have just said something that is more than just a little bit strange – we have said that the authoritative version of reality (which allows for no other interpretations, just as Jehovah tolerates no other deities) is not – on its own terms – to be regarded as merely ‘the most probable version of reality’ but the ‘absolutely certain version of reality’ (i.e. it’s the ‘gold standard for everything’) but there is all the same something highly suspect about such a definite positive statement of reality. It doesn’t ring true in other words. It doesn’t ring true despite its uncompromisingly emphatic nature (or perhaps – we could say – because of it). Are we to take it that reality is rigid, and ‘black and white’ in its character, like a block of stone, like some immovable edifice? Is reality a tyrant, in other words? In human terms, we know that when someone we meet is rigid, dogmatic and inflexible in their outlook, and seeks to impose their own version of reality on everyone else, then this is invariably an external compensation for internal insecurity, an outward display of strength that serves to mask an inner weakness. Are we then to believe that reality itself is insecure, and that it is trying to cover up its ‘inner weakness’ with its tyranny over us? Clearly this is utterly absurd – just as a genuinely strong person doesn’t have to bully or control everyone around them, so too reality – because it is already true (with no help from anyone else) – doesn’t need to prove or assert itself as an insecure person would. The truth has nothing to prove, whilst a lie always has everything to prove. It might seem highly dubious to be making inferences about the nature of reality based on the quirks of human psychology but everything that we have just said is echoed in the Dao De Jing which might be counted as the profoundest attempt to say something about reality that humanity has ever produced. In Chapter 34 for example, we read:

34.1  The Great Tao is universal like a flood. How can it be turned to the right or to the left?

34.2  All creatures depend on it, And it denies nothing to anyone. It does its work, But makes no claims for itself. It clothes and feeds all, But it does not lord it over them:

34.4  All things return to it as to their home, But it does not lord it over them: Thus, it may be called “the Great.”

34.5  It is just because it does no wish to be great That its greatness is fully realized.

The point we are making by bringing the Dao De Jing unceremoniously into this conversation is that ‘the reality which can be defined is not the true reality’. The very first line of the Dao De Jing reads (to give one translation) –

The reality that has been defined – and which makes an exclusive claim on our attention on this account – isn’t ‘defined’ because of any special nature or quality it might have but because of its aggression. This particular way of looking at things ‘puts itself forward’; it ‘pushes itself forward’ by repressing or subduing all competing viewpoints and that’s how it gets to be ‘true’. It’s true because it itself says that it is, in other words. The defined reality that we place so much stock in isn’t defined because it’s ‘genuinely true’ therefore, but because it has successfully fought for our attention. It has –for whatever reason – out-competed all other perspectives. Thus the reality that can be defined (or which can be spoken of) is not true reality.

So even though the equilibrium value is particularly emphasised – emphasised so very much that it has become ‘the only value in town’, this doesn’t mean that there’s anything special about it. It may say that it special (it says this implicitly by the way pushes itself forward, by the way it ‘silences all other voices’) but it’s only special because it itself says that it is, and that argument doesn’t count. Self-asserted specialness doesn’t mean anything – if someone came along and very emphatically told you that they were special would you take their word for it? An equilibrium state is like a meme on the internet that everyone keeps clicking and the more views it gets – right up into the tens of millions, let us say – the more other people want to see it so the whole thing snowballs. Positive feedback sets in. But even when it becomes the most viewed meme on the planet, that doesn’t make it inherently special!

Coming back to the paradigm of classical thermodynamics, we can say something very interesting about the E-state to which all things inevitably tend (because it is what lies at the bottom of the irresistible entropy gradient) – we can say that it is not real. We can argue this in two ways. One way is to look at the E-state in terms of information – information (as we have already said) is a measure of the improbability of the situation and the E-state is – by definition – the most probable situation. In a situation that has been totally defined (i.e. where there is only one level of description) it isn’t just probable but certain – it’s become an absolute. The level of predictability involved is maximal and this means that the information content of an equilibrium state is always zero. The arrow of entropy (which in classic thermodynamic theory is always a one-way street) always takes us to a state of zero information therefore, and this is not the most exciting proposition in the world, admittedly! But we could also say that a world that has no information content isn’t actually a world – how can there be a world with ‘no information in it’, after all? This is a virtual reality that we talking about here, not reality. This is an abstract (i.e. defined) representation of the territory, not the territory itself. This is not ‘a world’ but a null world…

The other way of approaching this matter is to point out that if one ‘version’ of reality gets to be seen as ‘exclusively true’ (which is as we have said the process whereby the equilibrium state get to be the equilibrium state) then this is of course because the rest of reality has been excluded, but the problem here is that when one aspect of reality ‘cuts itself off’ from the Totality in this way then it ceases to be real – it becomes an abstraction, as we have just said. It just isn’t possible to separate one ‘slice’ of reality from the Whole Pie, and this is inherent in the ‘holographic model’ of the universe, where each part is said to contain the whole. So again, we can see that the defined or stated world becomes the unreal world – definition is obtained at the price of reality, which is a rather high price to pay by anyone’s reckoning!

Once we have put the mechanism of equilibrium-seeking into perspective like this (which is something that the process itself won’t do since it operates by eradicating perspective) then we can see straightaway that the ‘counter process’ whereby situations become less probable rather than more probable (where there is in other words a movement away from the E-state rather than a movement towards it is not ‘magical’ (in the sense of being ludicrously far-fetched and unbelievable) at all. It is – to be sure – far-fetched and ludicrously unbelievable from the perspective of linear thermodynamics, which has no way of modelling a process that moves in an anti-entropic direction, but once we see that the attractor state is always unreal (because it is orientated solely towards an abstraction) and that the undefined or unstated state is real because it doesn’t need to be artificially ‘perpetuated’ or ‘managed’) then a process that operates to take us towards what is ‘genuinely real’ and therefore away from what is only ‘an abstraction’ no longer sounds so fanciful. It’s not as if we are required to believe in unicorns or tooth-fairies, after all – all that is required is that we should understand the principle which says ‘The reality that can be defined as not the true reality’. Admittedly this is not the accepted way of seeing things and it isn’t the way that the thinking mind (which is itself an equilibrium-seeking mechanism) prescribes for us, but what of this? Since when has the consensus view of things been the correct one? Since when has Universal Truth come out of logic?