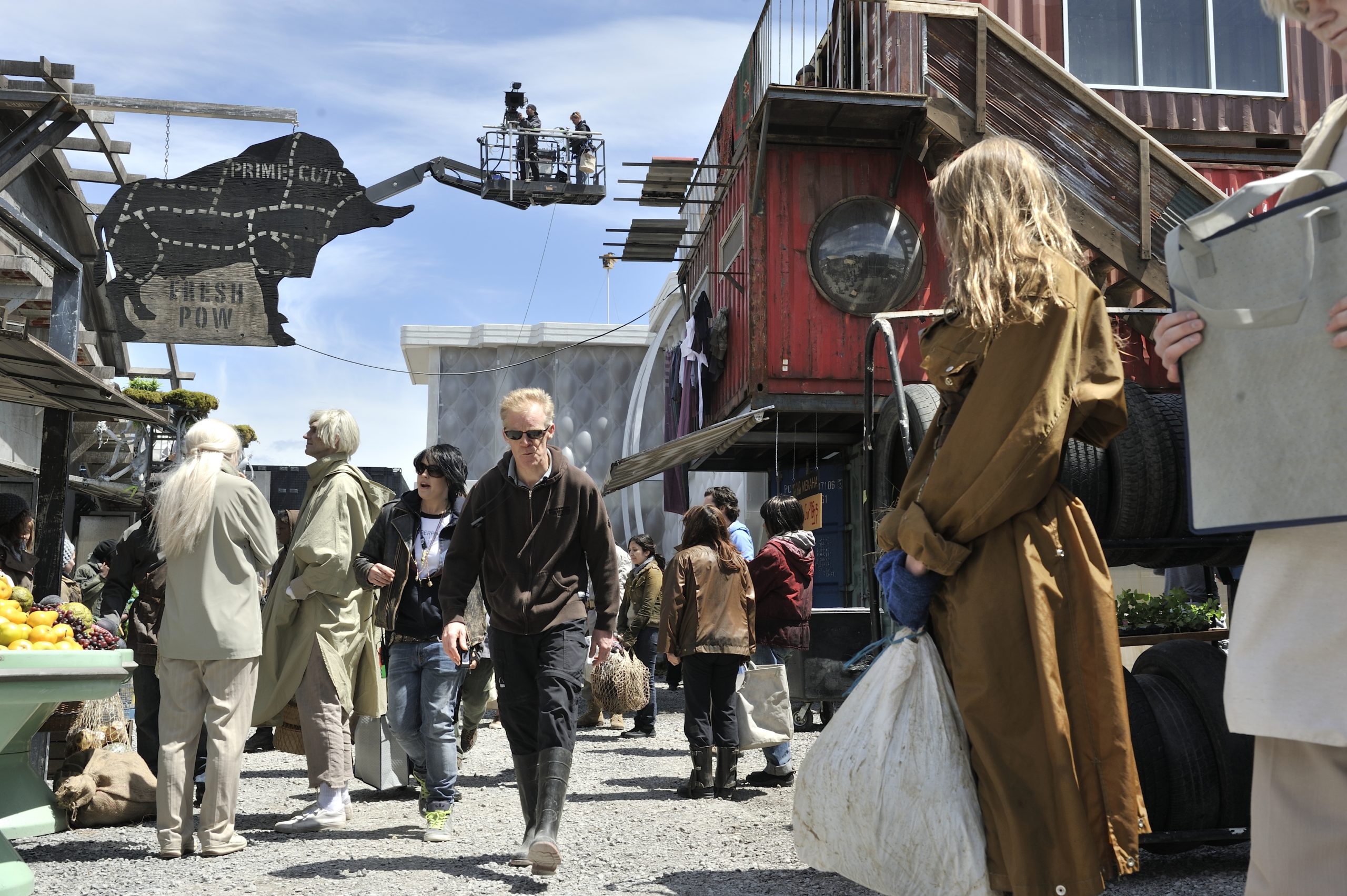 One way of talking about space is to say that it is a symmetrical situation. What this means is that any one position is as good (or as true) as any other – it’s ‘the same all ways’. This isn’t to say that space is uniform or homogenous however, which is what we might tend to think. Symmetry actually sounds very bland, but it isn’t. Space is actually complex, which is not at all what we would imagine it to be; it consists (so to speak) of any number of different viewpoints, all of which have been given equal weighting. Space is space because it is capable of holding any number of different (or contradictory) viewpoint all at the same time, without any problem arising as a result of this. Space is impartial, in other words – it doesn’t ‘play favourites’. ‘Reality is divinely indifferent’, says Richard Bach.

It is by not playing favourites that space is able to have this capacity to contain multiple competing viewpoints all at the same time; this is – as we have said – precisely what makes space complex. By way of complete contrast, the rational mind only ever operates from a single viewpoint, a single fixed or ‘taken for granted’ position – this is how it gets to produce a clear cut, black and white picture of reality, precisely because there are no ‘competing viewpoints’. There actually still are competing viewpoints of course, it’s just that we are no longer able to know about them. We’re blind to them. Things have been ‘simplified down’, we could say. Thought plays the game that there are no other viewpoints, that there are no other ways of looking at the world. It’s not quite right to say this however because thought has no option but to play this game; thought is ‘the game that there are no viewpoints’!

So whilst space (within which everything happens) is a perfectly symmetrical situation, a situation in which no one position has any more weighting than any other one, the rational mind creates asymmetries, situations where one position (one viewpoint) is exalted above all the others. This is an ‘artificial state of affairs’, we might say. It’s an artificial state of affairs because something needs to be tweaked in order to produce it. Symmetry has to be interfered with in order to produce to asymmetries, obviously enough. Just as a perfectly flat and perfectly still surface of water – like a millpond – needs to be disturbed into in order to produce ripples. This is a simple enough point to understand since we are all familiar with the idea of throwing a pebble into a pond in order to create ripples! The challenging thing to understand is the ‘inversion’ that is taking place here when it is the state of Original Symmetry that we’re talking about rather than in a millpond. When it’s the state of Original Symmetry that we’re talking about then the still featureless surface is the only thing that’s real and the ‘ripples’ aren’t real and yet from our (inverted) perspective the ripples are what’s real and the flat surface that gives rise to them isn’t. The branch denies the tree and this is the inversion in a nutshell.

In order for us to have a viewpoint – i.e. a specific position from which we can look out at the world (or measure/define the world) – symmetry has to be broken because in symmetry there are no specific positions, obviously enough! This means that in order for us to be able to measure or define or conceptualize the world we have to adopt an ‘unreal reference point’ which we will take as being real. That way, the defined world that swims into focus as a result of us assuming this reference point becomes ‘real’ to us even though it only gets to be real to us as a result of us using the unreal POV as a benchmark. This then is the inversion that we are talking about – the unreal becomes the real and the real becomes unreal! We might of course take exception to this and demand to know why our viewpoint should be considered to be unreal – such a suggestion being of course rather upsetting for us. The answer is straightforward enough however – it is the very fact that we have had to assume the viewpoint that shows it to be unreal. If we didn’t take this position (i.e. select it) then it wouldn’t be a position; if we didn’t break symmetry then symmetry wouldn’t be broken, and no one can really argue much with this!

What creates the difficulty in understanding this simple principle is our profound lack of awareness that any choice has been made (or has taken place) and what creates this ‘profound lack of awareness’ that we are talking about here is entropy. When we assume a particular viewpoint’ then we incur entropy, we create a whopping big load of entropy and it comes down like a heavy black velvet curtain over everything. Saying that ‘breaking symmetry incurs entropy’ isn’t really saying anything however – it isn’t really saying anything because a symmetry break is entropy. The only reason there seems to be a break in symmetry because we have lost the ability to see the Whole Picture (which is always symmetrical) Entropy really just means blindness when it comes down to it; it means that we have been separated from reality by a veil and so we no longer know reality. We have to make do to some with something else instead. We have to make do with a ‘fake world’, or ‘false creation’ instead. We have to make do with a cheap (if not so cheerful)‘entropic production’ which masquerades as the real thing. We are obliged to make do with ‘a pale copy of heaven’s original’, as the poem has it.

When all viewpoints are given equal status (and it’s not really that they are ‘given’ equal status since they already have it) then there is Zero Entropy because no veil has come down and nothing is hidden from us; everything is ‘new’, everything is ‘unprecedented’ or ‘unique’. Everything is information (as we might also say) and there is nothing anywhere that is not information. When we ‘choose’ to see things from a specific viewpoint all other views become automatically invisible to us and so the ‘assuming of the viewpoint’ is the incurring of the entropy. That’s what’s going on and that’s all that’s going on – there’s nothing else to it than this. From the POV that we have taken granted what we are looking at has the appearance of a ‘genuine creation’ – there is a real positive world there and it is this ‘definite existential situation’ that we all relate to on a regular basis. This is the ‘concrete reality’ that we cannot see beyond.

And yet there was no ‘positive act of creation’, there was no ‘creation of something out of nothing’ – the impression that there has been such a thing is a trick that is being played on us by entropy, that’s all. The impression of a positive creation is a consequence of the inversion. Nothing has been miraculously or magically created – all that has happened is that we have had the true (non-concrete) reality veiled from us. We have been ‘cast out from Paradise’, so to speak. This is the ‘Fall of Man’ that we read about in Genesis. Because we chose to see things from a single specific viewpoint we have been evicted from heaven and made to crawl upon our bellies in the dust like a snake, we are hapless heirs to sickness, infirmity and death and our span upon this earth is but short, with a distinct tendency to be unpleasantly brutish into the bargain…

Heaven (or Paradise) isn’t what we take it to be from this side of the Great Divide, however. When religions speak of Heaven what they always mean is ‘Heaven for the isolated or special viewpoint’, which is of course a ridiculous misunderstanding. We are simply projecting our ignorance and confusion ahead of us so that heaven becomes (to us) no more than another version of our present (fallen) situation. It’s the same thing all over again. It is in no way ‘radically different’ from our current situation – we’re simply not capable of imagining anything different from our current situation and – in any event – we wouldn’t want to imagine it even if we could. We wouldn’t want to imagine it and still less would we want to have anything to do with it! ‘Heaven’ – after all – is an oblique way of talking about the state of Original Symmetry and the state of Original Symmetry is where all viewpoints (all points of reference) are equally true.

The ‘problem’ with this is that if ‘all points of reference are equally true’ then this means that none of them are true. If everything is true and then nothing is true. When all possible positions are equally valid then the term itself loses all meaning! We are therefore immediately and unceremoniously thrown into a state of ‘infinite relativity’ where there is no such thing as a definite statement about anything and no such thing as a ‘logical thought’ about anything. They can be no such thing as ‘things’ anymore because things rely on dissymmetry. When everything is symmetrical there can be no such thing as ‘up versus down’ or ‘here versus there’ or ‘me versus you’…